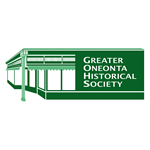 On Saturday October 3 at 2:00 PM, the Greater Oneonta Historical Society (GOHS)  presents a program about life in Oneonta in 1865-66 as part of its current exhibit, “Oneonta & the Civil War”, at the Oneonta History Center, 183 Main Street.

Rena Corey will speak  about the 1865 and 1866 diaries of Elizabeth Niles of West Oneonta and the book she is writing about the diaries, which she purchased in 2007. Miss Niles was the fourth generation of the Niles family to live on the family farm in West Oneonta. Her family were Quakers. Because of their belief in the equality of education for women, “Lizzie” attended and graduated from Oakwood Seminary, then in Union Springs, now in Poughkeepsie. According to Corey, “Oakwood fostered the opening of her mind and soul. When she returned to West Oneonta, she found it unbearable. Her fluid and literate writings report Civil War activity and the death of the President, views of mid-nineteenth century Oneonta’s people and places, and tell of the arrival of the railroad.”  For almost thirty years, Corey has owned  an antiquarian book and document business with clients throughout the US. Her writing has appeared in several publications, including The New York Times. Her first book was The Red Star Diary of 1916 of Bill Noxon, based on the teenager’s journals, which she found at a flea market.